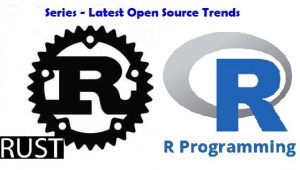 The next topics we are going to cover in this series are, ‘Rust’ and ‘R programming language’.

Rust is a language designed for highly concurrent and safe systems, tailored to create and maintain boundaries that preserve large-system integrity, i.e. programming in the large. Without compromising safety, Rust co-opts extensive compile-time checking ensuring 100% control. Features of Rust give more importance to safety, control of memory layout and concurrency. For example, if Firefox was written in Rust instead of C++, (Rust is supposed to be very much similar to C++) many of the errors in Firefox would have been resolved as compile-time bugs before its release.

Built-in unit testing is another major feature of Rust, which makes it a highly preferred open source language by developers. With all these features, Rust is an ideal alternative to C++ and Python, to write secure code, giving it a bright feature.

GNU project is a mass collaborative initiative for developing free software, founded by Richard Stallman in 1978 at MIT. Major purpose of GNU project was the creation of free software. R programming is a GNU project, which is an open source scripting language for statistical computing as well as graphics and which is extensible to boot.

Data manipulation, calculation and graphical display can be achieved using R programming, that too as open source. Another advantage of R programming is its attention to detail and its care for very minute differences. Already, R programming has got very active user groups, which will again increase its support and efficacy. These features, along with the ever-growing importance of data science in today’s cyber world has made R programming one among the latest popular trends in open source.

Both these programming languages, ‘Rust’ and ‘R’ are one among the highly popular open source trends in this year due to their distinctive features, support group and also due to latest technology enhancements.

Check out the next article in this series, here – Topic 5 : XaaS