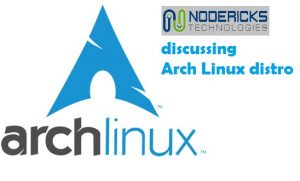 Arch Linux is an independently developed Linux distribution (i.e. operating system) for computers based on x86-64 architecture. Composed of free and open source software, it supports community involvement. Arch Linux offers a set of scripts, while most of the other Linux distributions offer graphical or curses based installer.

The ‘installer disc’ in Arch Linux is a fundamental tool needed to install a new system. This will include the wifi-menu command for connecting to wifi, command line utilities for disc partitioning (‘gdisk’ as well as ‘fdisk’), SSH daemon for remote installation (which will be immensely helpful for installation from another computer with Arch Linux.), and the contents of ‘arch-install-scripts package’. ‘Arch-install-scripts package’ is a suite of scripts with the following capabilities:

‘Manjaro’ (A Linux distribution based on the Arch operating system, developed with a combined focus on user-friendliness and accessibility.) and ‘Antergos’ (Released in 2012 as ‘Cinnarch’, it provides a vast accessibility to the software via Arch called AUR, as per need.) are examples of popular, easy-to-install and use distributions based on Arch.

The primary benefits of installing an Arch-based operating system are,