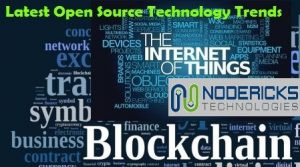 Let’s proceed to the next and, last two topics in this series.

The two types of distributed ledgers are,

To understand the technology in blockchain, read: https://www.nodericks.com/buzzword-talk-blockchain/

Open distributed ledgers like bitcoin can be told as open because they rely on crowd-sourcing, avoiding power-centralisation on any one authority. Blockchain technologies have the potential to replace third-party intermediaries. All these make the blockchain the most popular digital technology, especially with robust security as well as trust, in online financial transactions, currency as well as storage.

Internet of Things (IoT) is the technology of interconnecting devices (i.e. ‘Things’) via embedded sensors or other computing devices to enable communication (sending/receiving data) between these devices.

Use of IoT is getting expanded to various sectors, creating a revolution via data science. New open source technologies are being developed worldwide, making seamless integration with an open API to any ecosystem possible.  This will bring in flexibility opening door to wide possibilities for developers to create more specific applications, making IoT popular among open source technology trends.

Open source is spreading fast, and in 2018, it is going to be the highest driving force behind most of today’s technology innovations.