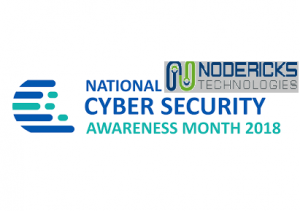 Since 2004, NCSAM has been observed in the month of October, in the United States of America (USA). NCSAM stands to encourage vigilance and protection by computer users. All of us know that in today’s IT enabled world, national security goes hand in hand with cybersecurity. NCSAM is sponsored by USA’s National Cyber Security Division (NCSD) within the Department of Homeland Security (DHS) and a non-profit organisation called National Cyber Security Alliance (NCSA).

In this 15th year, NCSAM is being celebrated as an annual initiative to raise awareness on the importance of cybersecurity. NCSAM 2018 is a combined effort between the respective government and industry (Example: Recent note on Google’s homepage indicating that it is the cybersecurity month, along with a message requesting end users to perform a quick cybersecurity checkup) to ensure the fact that every American has the adequate resources, guaranteeing robust cybersecurity along with increasing nation’s resiliency during any cyber-threat.

NCSAM was spread to European Union (EU) in 2012, and now it is a significant effort which works towards promoting cybersecurity issues and educate the public on the dangers of online attacks. Ensuring robust cybersecurity has become a necessity today, where cyber attacks are rated as the 3rd top cause of global disruption over the next five years, falling behind natural disasters and weather calamities.